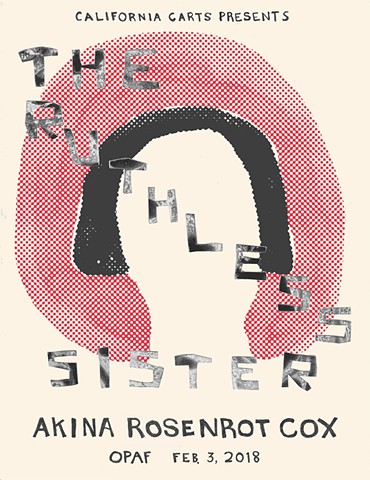 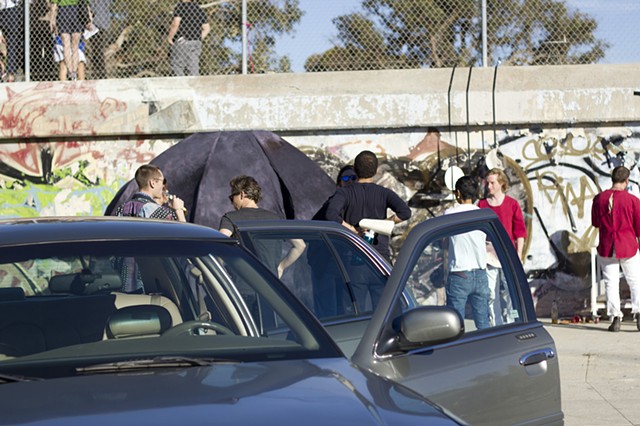 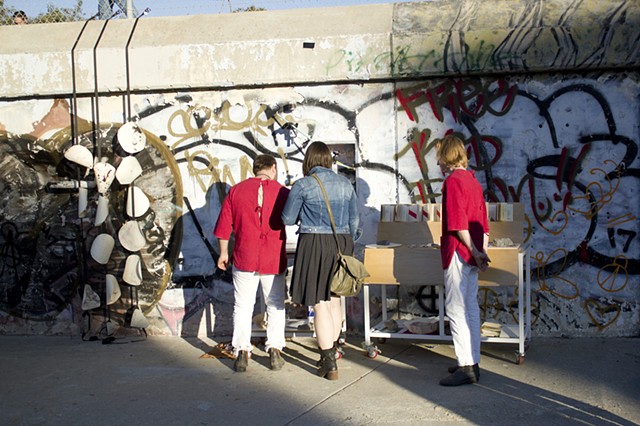 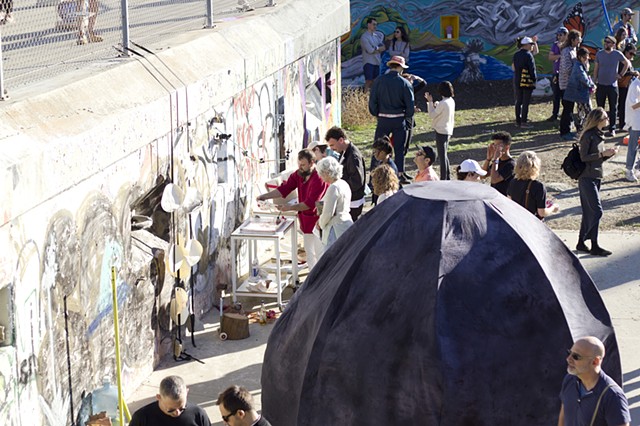 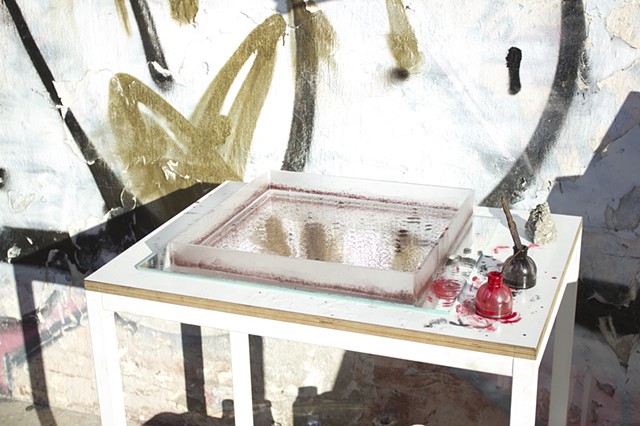 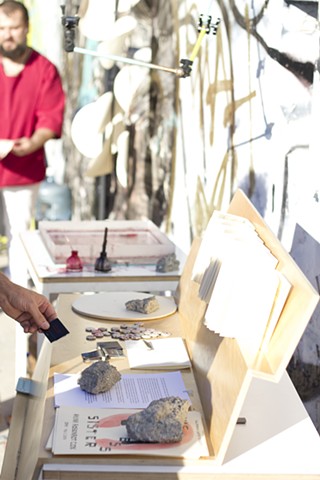 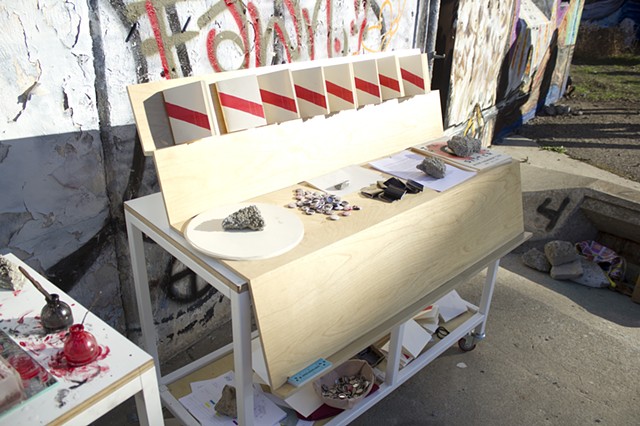 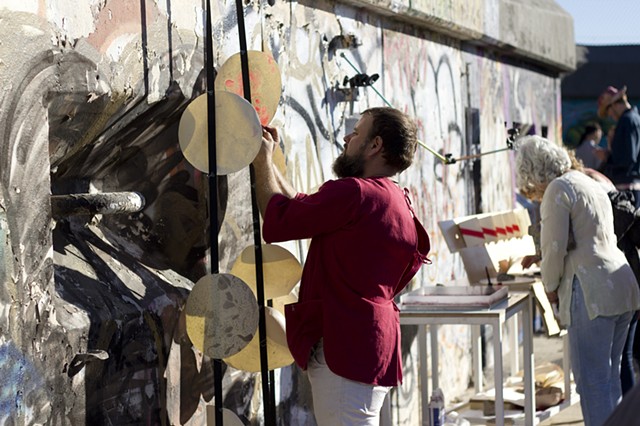 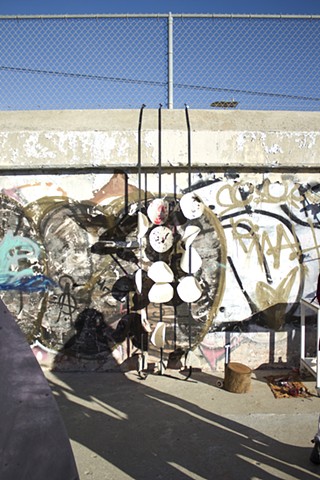 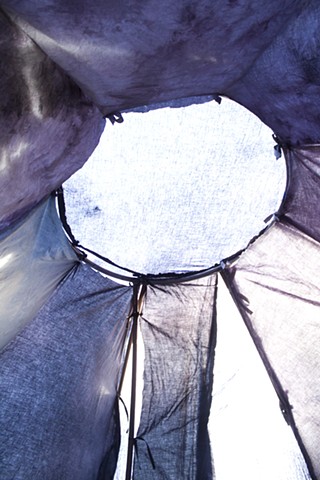 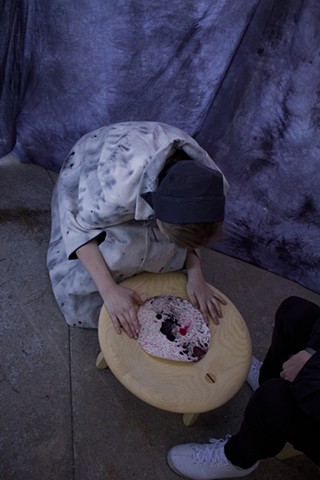 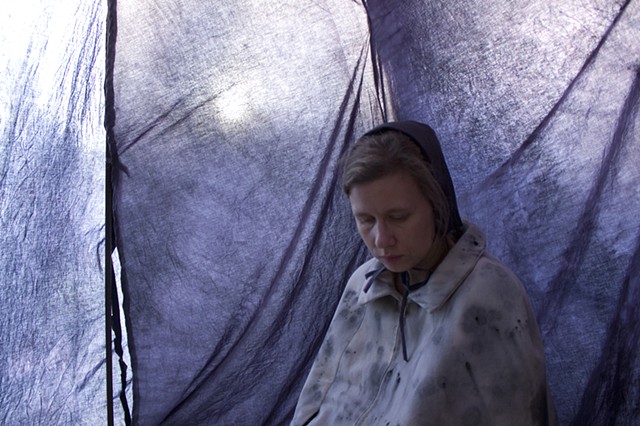 California Carts is pleased to present The Ruthless Sister, a performance by Akina Rosenrot Cox, at the Other Places Art Fair from 12-5pm on February 3, 2018 in San Pedro, California.

The Ruthless Sister explores the human desire to look for life’s answers by ascribing significance to meaningless phenomena, and the people entrusted to do so. For millennia, people have developed methods of looking for signs among the chaotic and mundane. Weather, skin, dust, rocks, smoke, and bones are just a few of the tools used to decipher the future. The god of the Old Testament is portrayed as shouting instructions down a mountain, but priests received their sacred communications by casting lots. Marbling is another ancient divination technique. Originating in the Middle East and Central Asia, it relies on the natural separation of oil and water to create random designs on paper. The resulting composition is used to reveal heavenly intentions, much like the reading of tea leaves.

Women have long played the role of intermediaries between worlds. As oracles, priestesses, and witches, they’ve occupied a precarious position between reverence and danger, depending on their society’s reception of them. Often existing as solitary creatures, they also sometimes band together to consolidate their powers. Examples in history abound, from Catholic convents and pagan covens to the Black Mares, Demeter’s priestesses in Ionic Greece.

During the performance of The Ruthless Sister, Cox and two assistants will marble paper with the audience. Cox will give readings based on the resulting work. The Ruthless Sister also marks the release of Cox’s new artist book, which investigates how our beliefs affect our most intimate decisions.

Akina Cox lives and works in Los Angeles. Her work has been included in exhibitions at Commonwealth and Council, Monte Vista Projects, and LACE. Her collaborative projects have been exhibited at the Center for the Arts Eagle Rock and the Santa Monica Museum of Art. Her artist books can be purchased at Otherwild in Los Angeles, Art Metropole in Toronto, and Printed Matter in New York City.

California Carts is an organization dedicated to building practical and well-designed work systems for artists and art institutions. Located in the Glassell Park neighborhood of Los Angeles, they design and fabricate tables, carts and various studio tools based on the specific needs of the infinitely varied artists they encounter. In addition, they host workshops and events and sponsor artistic endeavors such as this. For more information go to www.cart.life